“We’re starting at level one for my campaign.” - GM

There is a low grumble from the group of players, who reluctantly start to fill in their character sheets with the minimal stats, skills, and abilities presented at the start of most games.  Each looks longingly at the higher levels, and plots their eventual growth to real power, and real fun.

Min/maxing is a term used to describe when players stretch their character building resources in order to maximize efficiency in one area by sacrificing efficiency in another.  The most common example is a barbarian reducing his social abilities to get just a few more points into his strength.  Or, a sneaky thief might sacrifice any usefulness in combat in order to ensure his pick-pocketing skills are top-notch.  In both of these situations, the players focus on one thing they want to shine in, and sacrifice nearly everything else. 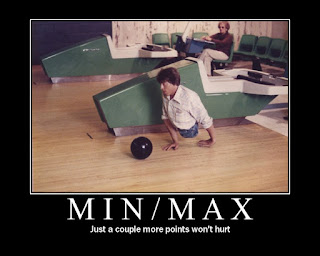 But specializing is good! We want to be awesome at something! So is this a bad thing? Actually yes.  While it’s just fine that players want their characters to excel in areas the characters should excel at, there’s two major problems with min/maxing:

First, characters who only do one thing (e.g. I cast fire magic.) are generally considered ‘flat’.  They do not have that multi-dimensional mix that makes for a good story character.  At first these characters are fun, but they quickly grow old as a game goes on, because they are a ‘one-trick-pony’.

Second, by sacrificing usefulness in other areas, this means that it’s harder to get any sort of group teamwork.  If the ‘enforcer’ can only fight, and the ‘face’ can only talk, and the ‘hacker’ can only hack… it means no one is actually playing the same game together.  They might be physically present - but they’re not useful.

And this, ladies and gentlemen, is one of many reasons why Shadowrun, while brilliant in setting, is a horrible game to actually play.

So how can we create a game that “minimizes”, if you will, this issue?  Let’s start by looking at some mechanics that encourage min/maxing.  The first gets back to my initial example; if characters do not feel special right off the bat, there’s a tendency for players to min/max in an effort to make them special in some way (e.g. I have more strength than everyone else, yay!).  Obviously this has a lot to do with setting (e.g. slaves trying to escape the coliseum vs. god-slayers looking to conquer the world), but its definitely a problem in a lot of games.

Games do this to ‘teach’ new players; ease them into it.  But I would argue it’s more important to make new players feel awesome about playing, than to ensure they know every little detail of the rules.  RPGs are complicated, and they are not going to get it all the first time anyway.

"When you want to play a wizard, you generally don't want to play him as a fumbling trainee." - Peter Wallis from the RPG Brain Trust Facebook Group

Another mechanic to look at is prerequisites for skills and abilities, which can be a huge source of min/maxing.  This is a mechanic that says I can have X, but only if I have Y.  Well, what if I don’t want Y?  Why can’t I have X because Z also makes sense?  Prerequisites can add strategy to character-building, which is normally a good thing, unless it pigeon-holes players into only going down one path.  If you’re going to have prerequisites in your games at all, ensure that they are generic, such that there are multiple paths available to achieve the same end goal.

Lastly, RPGs that use XP or some other point-buy system encourage min/maxing by letting players only buy one thing at a time.  Initially these systems seem great, because you can customize your character to whatever end.  But this almost always boils down to players “customizing” all of their points into a single area.

Players can help themselves by purposefully trying to not min/max, but that can have just the same effects as min/maxing!  If you are mediocre at everything, you’re now useful in none.  This creates dull characters to play, which is rarely fun for anyone.  What we’re really looking for is multi-tiered characters, with many strengths and a few different weaknesses. 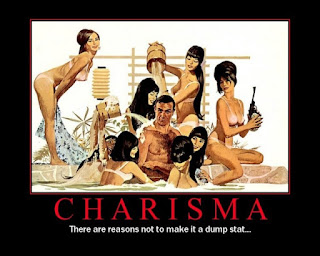 So I believe it’s up to the game to help. Let’s look at some mechanics that actually help alleviate min/maxing. The most common one is surprising “levels”.  Character levels in RPGs allow characters to grow both in combat abilities and non-combat abilities.  Dungeons & Dragons 5e (so far) has done a great job at giving players both choice in their levels and balance in the abilities presented.  Usually, there is both a combat bonus and a non-combat bonus within each character choice, including the generic ‘feats’ used at higher levels.

Another mechanic that helps our cause is not rewarding XP for individual situations.  It’s easy to pick on combat, and say that because we give XP for killing elves, the players are always going to kill elves.  But the same is true for any system which uses a ‘use-it-to-up-it’ system.  If talking to the bartender gives you XP towards your talking skills, I’m going to sit there and talk to the bartender until I’m actually good at it.  A lot of GMs already realize this, and often give out an equal amount of XP at the end of any given session or major plot point.

D&D brings about balance by ensuring that the combat focused abilities are all equal in power (as much as possible anyway).  They’ve openly declared that they do not balance non-combat abilities, as this would be not only extremely difficult, but simply not that interesting.  For a combat-focused game, this makes sense, but I think we can do better.

I suggest that, much like generalizing character ‘stats’, that we categorize XP into common groups that make the most sense for our game.  For example, we could have combat XP, which is earned through combat, and spent towards combat-focused abilities, and then have ‘role-play’ XP, which is earned through solving issues or completing quests, and spent on non-combat abilities.

This system balances power with utility.  It keeps the power gamers happy by ensuring they can min/max their combat abilities without sacrificing some of the extra fluff, and it keeps the role-players happy by ensuring they don’t have to suck at combat to be awesome at diplomacy.  As an added bonus, it more or less forces players to have the multi-tiered characters that usually make for a well-rounded story, where everyone at the table is doing something no matter what is going on.

We know that we could make every skill individually level up (Oblivion style), but that’ll end poorly, as we’ve discussed.  Instead, let’s just take it one step further and look at the three “Pillars of Adventure” defined by D&D: exploration, social interaction, and combat.  I would argue that these are excellent categories for XP, and that if we want everyone to be useful everywhere, that this would be the way to go.   Of course, we have to be careful, or no one is going to feel special against anyone else in the party…

For Hostargo, action/combat is going to be a large part (at least 50%) of the game.  As such, I believe I’m going to implement a double XP system: one combat and one non-combat, to be spent on their respective areas.  However, to minimize having one area excel over another, I’m going to give out a “star rating” at the end of each adventure (1-5), and give each player that much XP to work with in both categories, effectively forcing them to spend the same amount in the two different areas.

You May Also Enjoy

is as addicting as cocaine. It is as harmful as cocaine; it just takes decades to kill you. I might be exaggerating, but this is the mindset you need to over...

Getting enough, and getting only enough, is the key to the “balanced” diet. To do this, we need to understand what our bodies actually need.

To cut down on eating, we’re going to back off slowly, hour by hour, with “one easy trick”: Serve yourself your normal portions. Drink a huge glass of w...

We want to get away from the Standard American Diet (SAD) of nutrient-robbed grains, artery-clogging meat, and fat-building drinks. Don’t be SAD.